A former MasterChef UK contestant from Sheffield has taken on the Guinness World Record for most people cooking simultaneously online.

The attempt, which is likely to dwarf the current record of 176 people, must be checked by Guinness World Records before it can be announced on The One Show this Friday at 7pm.

He said: “I love cooking – but I miss cooking for and with my friends.

“Raheel has brought together a huge community of friends who can share a moment of joy, followed by a lovely tea.

“It’s all fuelled by his enthusiasm and love of food. What a wonderful thing.”

Also helping was Mr Mirza’s daughter Isla, who is a frequent guest on other virtual cooking classes he has since his appearance on MasterChef.

He said: “Without her technical support, I would really struggle.”

Isla said: “Because we’re expecting such a big number, we’re like 827 is not much.” 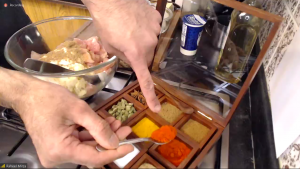 Raheel Mirza teaches an audience of over 800 how to cook his signature butter chicken.

Mr Mirza featured in season 16, episode 9 of MasterChef UK, impressing judges John Torode and Gregg Wallace with his personal touches on classic dishes, but losing out to Claire, Natasha and Sam in the final challenge.

For his world record attempt, he guided his audience through his signature butter chicken recipe, with paneer and tofu options available for vegetarians and vegans.

Many used the event as an opportunity to do something different with their households during the third national lockdown. Rachael Ward, an optical manager from Doncaster, took part with her partner and teenage children.

She said: “This was a fantastic opportunity for us and others to have a little fun in these difficult times and it certainly made our Friday night.

“I’ll definitely be tuning into The One Show as I’m eager to find out if we beat the record.”