Clammy tiles, stifling changing rooms, the echoes of screaming children and the stench of chlorine. Maybe if you’re lucky there’s a stray plaster lurking in the shallows. Love it or hate it, the public swimming pool is a landmark of British culture.

But where do you go for your fix in a national lockdown when pools are closed and you’re restricted to one outing for exercise a day?

For a growing number of Brits, the answer lies within the calm – but freezing – waters of lakes, rivers, and reservoirs.

A surge of wild swimmers have taken the polar plunge in lockdown. The magazine Outdoor Swimmer estimates public participation in outdoor swimming has multiplied by between 1.5 and 3 times over the past year, with 4 million people swimming outdoors annually, according to the Guardian.

Many are going in search of inner calm, with nearly three quarters of outdoor swimmers claiming outdoor swimming is essential or very important to their mental health.

Last weekend, when MyLondon reported South Londoners are spending their weekends in wheelie-bin ‘pools’ to chase the natural high of a ‘cold shock’, the reaction was overwhelmingly one of bewilderment.

But for Timothy Ridgway, a 29-year-old support worker for adults with mental health and learning difficulties, freezing dunks in the water help to draw a line between work and personal life. He says on a really bad day, getting in the water is like a reset button.

He understands why people are baffled: “When I first got in the water I thought this is absolutely bonkers.” The first venture left him hankering for more, and as for many other wild swimmers, the “wild” activity quickly turned into everyday routine. “It does something to me. I start getting withdrawals if I miss a few days.”

Mr Ridgway’s first successful swim was on a biking trip to the Lake District with friends. They arrived at Buttermere Lake and he decided to go for a dip.

“The next thing you know I’m lying on my back in the middle of this huge lake, surrounded by mountains and I just found it so zen. When I got home I thought I’d try the local reservoirs.” He kept it up, and has been going two or three times a week throughout winter, feeling safer on a swim than he does at the supermarket.

He says snow swims are the most surreal of all. He purposefully opts not to wear swim shoes so he can feel the crunch of the snow under his feet before he gets in. “It adds to that crazy element, like, it’s snowing, and I’m swimming in a reservoir.” 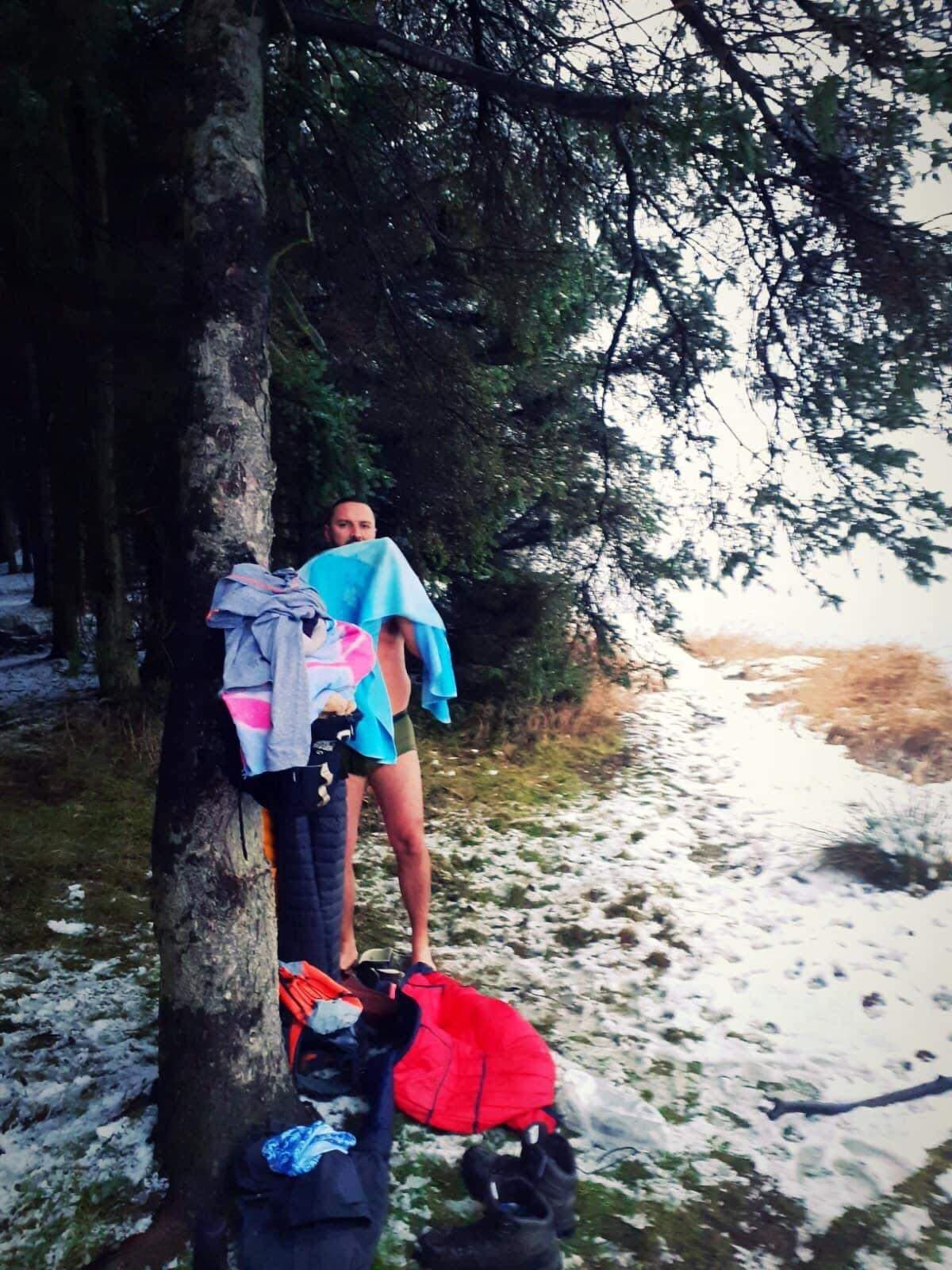 Timothy Ridgway gets ready for an arctic dip.

The reservoirs Mr Ridgway swims at are surrounded by pine trees, and unlike the local swimming baths, the only sounds echoing around him are birdsong and a breeze over the water.

The water temperature rarely reaches above three degrees, so swims are limited to about five minutes. This is enough time for the cold water to do its magic, as environmental physiologist Prof Mike Tipton explained to the magazine Science Focus.

According to Prof Tipton, the shock of cold water immersion causes an instant adrenaline reaction that sends your heart racing in a ‘fight-or-flight’ response. Cortisol is released, resulting in a surge of beta-endorphins in the brain which creates a feeling of euphoria.

The more freezing dips you take, the less your body reacts to the shock, which Tipton claims could also make you less responsive to everyday stress.

While Mr Ridgway’s time spent at reservoirs is often a solitary form of therapy, he longs for the days when wild swimming can once again be a social sport.

A Sheffield swim Facebook page that had hundreds of members at the start of lockdown now has thousands, and while restrictions were eased in the summer, Mr Ridgway saw many of them organising group swims.

“You’d all meet and have a piece of flapjack after your swim and a bit of a chat. There was a really good social element to it.” It’s something he can’t wait to see back up and running, adds Mr Ridgway.

Like Mr Ridgway, 45-year-old Lindsay Cook from Hitchin jumped into the deep end with wild swimming and is now addicted to the adrenaline rush.

“It’s a complete buzz. When you get in the water it’s so cold it takes your breath away, and you just think ‘I can’t do this’ but you realise a few seconds later that you can. The colder the water the greater the endorphin rush is.”

She recently did an ice dip in a nearby pond, where you have to break the ice to get in. “That was a really positive experience. I know a lot of people who’ve broken ice in the past week and each one of them has been like ‘Wow that was amazing I want to do it again,’” says Mrs Cook. 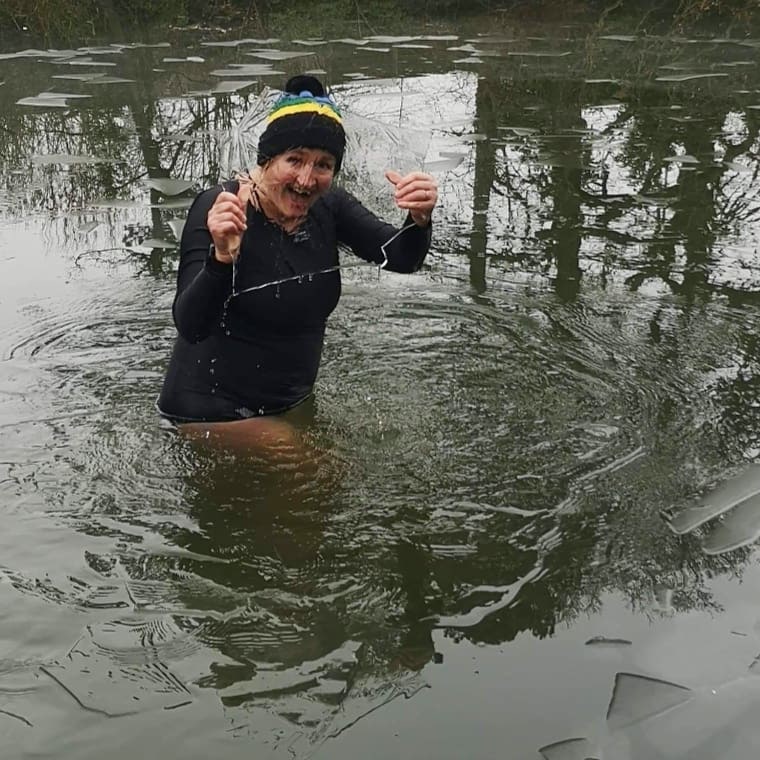 For mum-of-three Mrs Cook, wild swimming allows precious time to collect her thoughts and connect with nature. “This lockdown’s really tough with the weather being so cold and not much daylight. It’s given me that outlet that I need, just to breathe.”

She is sympathetic towards the plight of bin-bound Londoners who can’t get out and about to wild swim, but says nature is what really draws her to it. “You can hear the water rippling. You can hear the birds. The spot we go to in the morning there’s an owl that flies around.”

“I do know someone who has wheelie bin dips, but it’s not for me. I’m lucky enough that during lockdown I can still get out and get my cold water fix. If I couldn’t, then would I go in a bin? I don’t think so.”