The Sheffield Hatters women’s basketball club are one of the most decorated sports clubs in the UK. This year they are celebrating their 60th anniversary, so we spoke to trustee Sarah McQueen, to find out how the club has managed to get through lockdown and what their plans are heading into this historic year.

The Hatters are run by volunteers, who fundraise to keep the club going. Due to the first lockdown in March last year, fundraising efforts in public were out of the question.

They thought an investor was available to help them, but, because of Covid-19, the financial help pulled out. This meant the Hatters had to withdraw from the Women’s British Basketball League (WBBL) and enter division two. 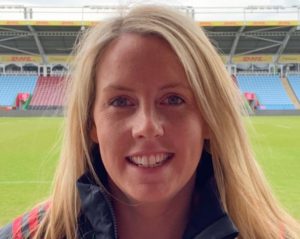 Ms McQueen said: “It meant we were on a double backfoot. If we knew we didn’t have an investor we would have been fundraising for longer and doing everything we could. Rather than just having a couple of months to raise the funds.”

“This September marks our 60th anniversary as a club and this is the first year that we’ve not been competing in that top women’s flight. It would be a bit like Manchester United just dropping out of the Premier League.”

Star players Georgia Gale, Naomi Campbell and Helen Naylor were available to the Hatters at the start of the season, but have since moved on in order to play at an elite level.

Click to see how Helen Naylor won the 2019 WBBL cup for the Hatters in the last moments of the match. (shared by Sheffield Hatters, @hatters_bc)

Ms McQueen said: “We had players of a very high standard who were in that division two team.”

“Then because they couldn’t play, Georgia went and played in Spain, Naomi goes to Nottingham Trent and Helen Taylor plays for Manchester Mystics.”

It is fair to say that coronavirus has hugely impacted the Hatters, but they are still making strides online and hope to attract young players back when team sports are allowed once more.

The club run online sessions on a Tuesday and Thursday, with the opportunity for younger players to meet seniors and talk to those who are at university on a scholarship with Sheffield Hallam.

Ms McQueen said: “We give that opportunity for them to talk in their teams as well as do virtual workouts on a Thursday. So they keep the routine they had with training and keep the feeling that they are part of the ‘Hatters Family’.”

The club have clearly been busy during lockdown, implementing the foundations for when sport returns, but insist they need a sustainable solution in order to continue in a post-COVID sporting world.

Ms McQueen said: “What we have achieved, all on volunteers, is pretty impressive. If we had the financial backing, or a way of being able to generate more income, we could do so much more.”

“We’re going to create regional tournaments and games up until August within all age groups, just so people get to play.”

“For us, we need to find a more sustainable solution to have the WBBL team and to be able to go out and do more within the community.”

Interest from young players is strong and the initiatives the club hopes to use in order to gain interest from the community are promising. Now, the Hatters are looking towards the summer months with a sense of hope that they can gain funding and get more people involved in Sheffield’s basketball scene.

Owls fans have sent their messages of support to Sheffield Wire and promised to create a 'rocking' atmosphere at...